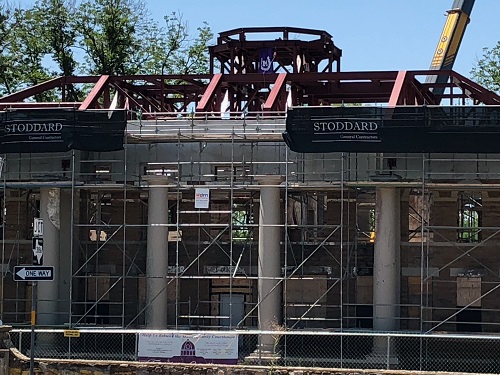 Representatives of the Friends of the Courthouse were at the Mason County Commissions meeting Monday to present the County with checks totaling $1 million for use in restoring the historic structure. Two checks were presented —  each for $500,000 from Mason Bank and The Commercial Bank that had participated in the campaign. And, the group reiterated its commitment to presenting a check on the first Wednesday of each month until they’ve reached their goal of contributing $5 million to the Courthouse restoration.

County Judge Jerry Bearden described the Friends of the Courthouse is a “wonderful group of people who worked and put together this donation to rebuild the Mason County Courthouse.”

Other items on the Commissioners agenda included amending the Courthouse Building Fund in the 2022 budget; approving the use of ARPA funds for the Fast Psych Program rather than send a prisoner to a psychiatrist ; and hiring and classifying a new full-time jailer/dispatcher and a new temporary road and bridge worker.

Also on the agenda was approving County salary schedule adjustments for several employees who were not included in last year’s salary adjustments.

The session  concluded with a workshop as part of preparing for the 2023 fiscal year budget.

(KNEL will have a complete report on the Commissioner’s meeting Wednesday morning a 8:45am during KNEL’s Morning Program.)