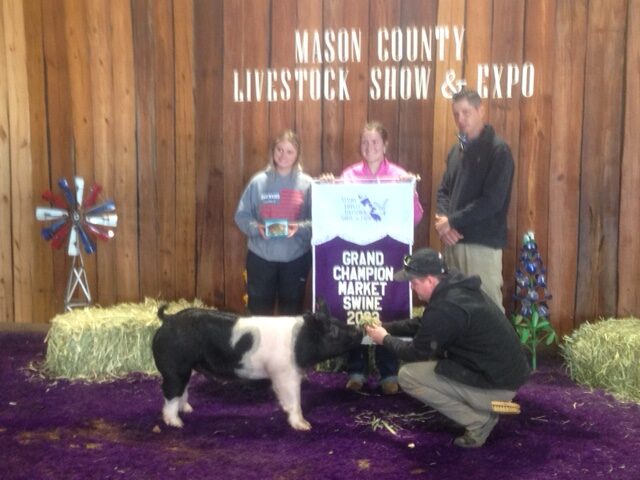 Dakota Martin has a winning record at the Mason County Livestock Show and Expo.

Last year, at the 2022 Mason Stock show, she was the exhibitor of the Grand Champion Steer.

Dakota follows in the footsteps of her older sisters — Chama, Sierra and Aspen — who were all exhibitors of prize winning animals at the Mason Show.

The Grand Champion Steer shown by Dakota at the Mason Show is an 1,390 pound AOB (All Other Breeds) named Iceman that she describes at a “Good boy.” She  plans to show the steer next at the San Angelo show.

The Grand Champion Market Lamb exhibited by Dakota Martin was a 147 pound Medium Wool.  The Reserve Champion was a 165 pound Finewool Cross exhibited by Avery Brooks.

Friday morning events included interviews for the Food and Nutrition portion of the Show at 8:00am, followed by the Ag Mechanics show at 9:00am.

The General Store will open at 4:00pm, and the Buyers Reception will begin at 4:00pm also. The Premium Sale is set for 6:00pm.  All events are being held at the Fort Mason Park Community Building.