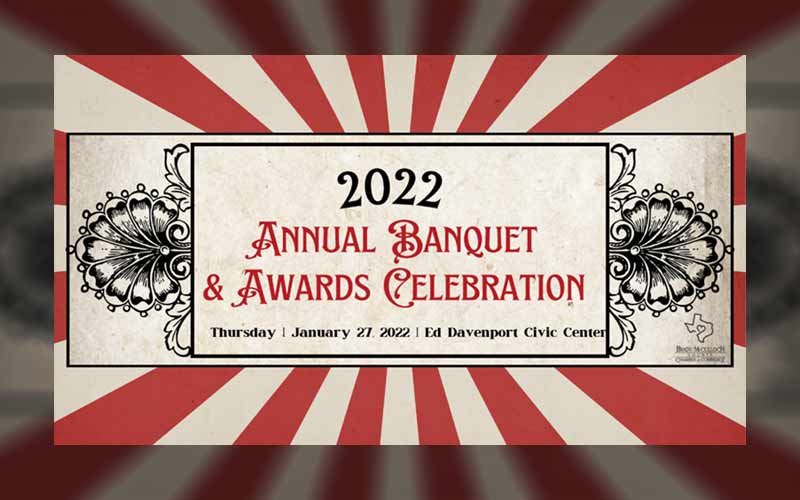 James Petty and Lauren Jacoby were honored by the Brady/McCulloch County Chamber of Commerce Thursday night for their contributions to the community.

At the Chamber’s annual Awards banquet Thursday, James Petty was recognized by the group with the Lifetime Achievement Award for his impact on the community over his life.  A graduate of Brady High School, Petty has had a special impact on youth in the community,  especially through sports.  His activities included starting the Brady 7 on 7 football, serving as the voice of Brady Bulldogs football on KNEL and as one of the anchors of the annual Famed Brady Bulldog Band auction. Responding to the award, Petty said he was extremely honored and humbled by the recognition of the people in his home town.

Lauren Jacoby was named the Citizen of the Year for her on-going and tireless efforts at the annual Goat Cook-Off  keeping the judging on track, and for her work  in making the St. Patrick’s Catholic Church’s Fall Festival a success.

Named as the Agri-Business of the Year was the John Quinn Ranch. In operation since 2002, the Ranch has focused on restoring native tall grass and spearheading soil and water conservation efforts in addition to their efforts developing outstanding cattle and a healthy wildlife population.

Sue Lubke and Lubke’s GM Cars and Trucks was recognized as the Small Business of the Year.  In business in Brady for 50 years, Lubke’s has survived a range of challenges over time, and especially in the last few years, as a caring, involved organization devoted to its home town.

Recognized as the Large Business of the Year was the Heart of Texas Health Care System that recently celebrated a 10 year anniversary of its new facility, and has recently opened its new assisted living facility.

A new award added last year is the Outstanding Community Organization went to Hope From the Heart in recognition of its 20-year commitment to helping people in the County who are being affected by cancer.

Lavonta Harper was recognized as the Outstanding Educator of the Year.  She has been involved in Brady schools since 1995, serving in positions ranging from a teacher’s aid to an assistant principal.

McCulloch County Chief Appraiser, Zane Brandenberger, received the Distinguished Public Service Award for his work in meeting the challenges over the past few years of a rapidly changing real estate environment.

Devon Taylor, pastor at Vision Heights Church, was recognized as the Volunteer of the Year.  Over the past year, Taylor has been a part of a ranging from Brady Clergy, McCulloch County Resource Center, Salvation Army, the Halloween and Christmas in the Heart festivities and in getting the Palace Theater back up and operating.

Each year, the Chamber recognizes one of the members of the Board for his or her work supporting community.  This year, T. J Turk was named the Director of the Year.