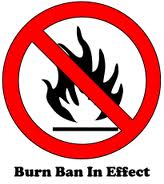 The final item on the agenda for McCulloch County Commissioners when they met Monday was consideration of whether or not to implement a burn ban in the County.   The burn ban previously enacted by Commissioners was lifted by County Judge Frank Trull two weeks ago following two days of rain in the area.  However, since then the hot, dry weather and strong Southerly winds have brought back increased fire danger for the County.

After some discussion, Commissioner Rick Kemp said the believed the ban should be renewed.  That motion was seconded by Commissioner Carol Anderson. The Commissioners then voted unanimously in favor of the ban.  The provisions of the ban are the same as the most recent ban, with special attention paid to guidance on hot work such as welding and burning cactus, restaurants and outdoor grilling.  One change from the last ban is that the new one is set for 90 days, rather than expiring in 30 days.

The session began with a presentation on of the proposed County employee health insurance plans, and those were subsequently approved by Commissioners.  ,

Commissioner Randy Deans reported the County is currently getting an estimate of the cost of renovating the old Super S building.  The County can use up to $1.5 million of the American Recovery Plan Act funds coming to the County for renovations at the Super S facility.  It has been proposed that County offices located outside the Courthouse could be consolidated at the building. But, the final decision on any improvements will not come until after the more definitive costs estimates are obtained.

In addition to acting on a burn ban,  Commissioners approved participating in a Texas Association of Counties cybersecurity training program for County employees.