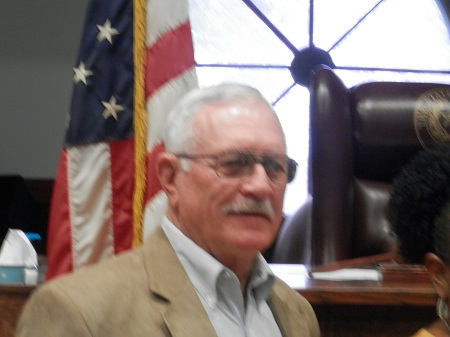 At their meeting on Monday, McCulloch County Commissioners voted to accept a letter of resignation from Precinct 4 Commissioner Rick Kemp,  effective November 1st.  Kemp was defeated in his bid for re-election by Don Bratton in run-off election earlier this year.  His current term will  expire in January.

Kemp told Commissioners he believes that when God closes one door, He often opens up others. And, he said, he feels that’s the situation he is now in. Kemp said he is currently serving as a minister at two small churchs in the area. Whether it will become full-time is still to be determined.

Being a County Commissioner has been interesting and rewarding, Kemp added. He said Precinct 4 employees are great individuals who do a great job for the people of the County.

Other issues considered by McCulloch Commissioners Monday morning  will include tabling an Interlocal Agreement with the City of Melvin while waiting for additional informantin; declining participation in the Texas Dept. of Agriculture Colonia Fund; and a County approving an investment policy for the County.