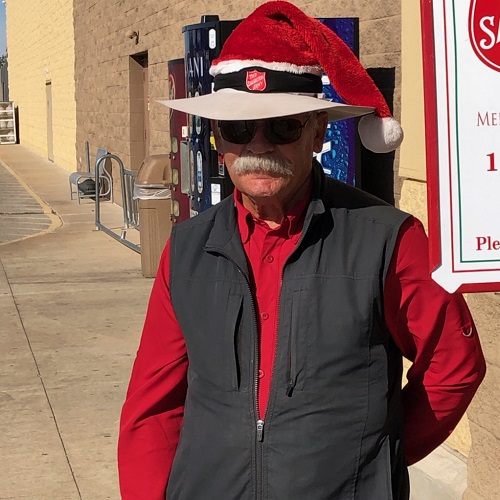 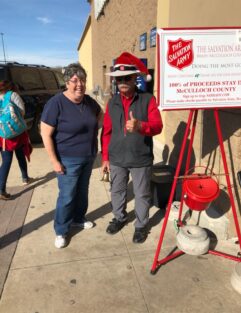 At the Brady Chamber’s First Quater “Good News” lunch on Wednesday,  local Salvation Army President, Devon Taylor, reported that a record $22,000 had been contributions to the annual Salvation Army Kettle campaign conducted between Thanksgiving and Christmas.

Taylor also took the opportunity to present a special Bell Ringer award to former Mayor Tony Groves for his remarkable record this year for being on-location as a bell ringer for Salvation Army in front of the local Wal-Mart.  Taylor noted that Groves was at his post for 32 regular two-hour shifts during the month, plus filling-in on other shifts on many other occasions. All-told, Groves covered roughly half of  all the shifts during the Holiday Season.

Groves was presented with a plaque and his own Salvation Army collection bucket.  He kept the plaque, but returned the bucket for further use by the Salvation Army.

Appearing on KNEL’s Morning Program Thursday, Groves said being a bell ringer gives him the opportunity to be face-to-face with people and to be friendly.  He also described it as a place where you can stand in front of a busy store and wish everyone Merry Christmas and not get arrested.

Overall, Groves said he thinks it’s a neat thing to do. He sais he found it interesting that the worse the weather is – the more people appreciate the effort of the bell ringer.  He said he enjoys that,  and really enjoys interacting with the kids and seeing their parents give them a hand full of change of a few bills they let the youngsters put in the kettle.