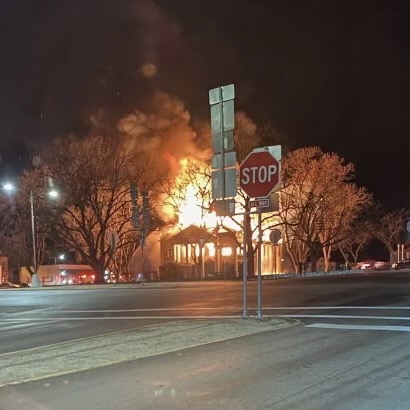 Mason County held a special ceremony Friday, Feb 11  to thank all of the Local and Volunteer Fire Departments who helped fight the fire  that destroyed the Mason County Courthouse on Feb. 4th, 2021.

The event had initially been scheduled for the on he one-year anniversary of the blaze on Feb. 4th. But, the frigid weather led to delaying the  the ceremony for a week to  Feb. 11.

At the event held on the West side of the Mason Courthouse Square,  Mason County Judge Jerry Bearden first recounted the events of the night last year when the fire occurred.  Judge Bearden also outlined plans for the restoration of the historical Courthouse  over the next 17 months.

But, the focus of he event was  to express the thanks of the Mason community to the members of 13 different local and volunteer fire departments who descended on Mason in the middle of he night to help fight the fire.

A special plaque created by Bridget Langdale from a piece of tin salvaged from the Courthouse after the fire was presented to each of he 13 fire depts .