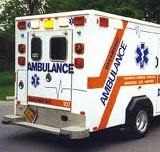 McCulloch County Commissioners began their regular meeting on Monday with approval of a notice setting a public hearing on September 15 to hear public comments on a proposed increase in the County tax rate.

Other items included on the Commissioners’ agenda covered approving optional fees for 2023; approving a request to put Senior sports banners around the Courthouse square; and approving an inter-local agreement with Upton County for housing female prisoners.

The final item on the Commissioners’ agenda was approving a response to the Brady City Council with regard to the annual reimbursement for EMS services outside City limits.  In previous discussions between the City and County,  Commissioners had initially proposed paying the City $165,000 to cover the past year. After the Brady Council declined that offer, Commissioners increased the amount to $190,000, which was also turned down.

The Brady Council most recently responded with an offer of $213,000, which they indicated is 16% of the net cost for operating the EMS, since 16% of the EMS calls received last year were outside the City in the County.

In their response to the Council, McCulloch Commissioners indicated their calculation resulted in net reimbursement amount of $198,400.  That amount, they said, is 16% of the total EMS expenses of $1.6 million — less $64,000 in payments from insurance and private pay and less 16% ($4,000)  of a small grant program.

The County letter recounted the progression upward of the amount being offered by the County in reimbursement –going from $165,000 to the current offer of $198,00. Commissioners also point out what they consider offset costs paid by the County — dispatch for EMS, fire and law enforcement; e-dispatch for EMS and Fire; and providing the new TextMyGov emergency notification program.  The total cost to the County for those services is put at $371,000 by Commissioners.

In their letter, Commissioners also raised some questions for consideration — are indigent patient EMS calls being allocated to the County, or to the Hospital District? And, they raise the overall question of whether the approximate $2.4 million cost of providing both the Hospital ambulance and EMS is the average expense for a county the size of McCulloch County, or do the options  for providing this service need to be re-evaluated.

The next move in the negotiations is now back in the hands of the Brady City Council.